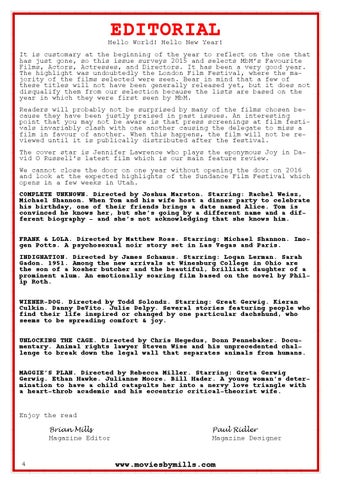 Hello World! Hello New Year! It is customary at the beginning of the year to reflect on the one that has just gone, so this issue surveys 2015 and selects MbM’s Favourite Films, Actors, Actresses, and Directors. It has been a very good year. The highlight was undoubtedly the London Film Festival, where the majority of the films selected were seen. Bear in mind that a few of these titles will not have been generally released yet, but it does not disqualify them from our selection because the lists are based on the year in which they were first seen by MbM. Readers will probably not be surprised by many of the films chosen because they have been justly praised in past issues. An interesting point that you may not be aware is that press screenings at film festivals invariably clash with one another causing the delegate to miss a film in favour of another. When this happens, the film will not be reviewed until it is publically distributed after the festival. The cover star is Jennifer Lawrence who plays the eponymous Joy in David O Russell’s latest film which is our main feature review. We cannot close the door on one year without opening the door on 2016 and look at the expected highlights of the Sundance Film Festival which opens in a few weeks in Utah. COMPLETE UNKNOWN. Directed by Joshua Marston. Starring: Rachel Weisz, Michael Shannon. When Tom and his wife host a dinner party to celebrate his birthday, one of their friends brings a date named Alice. Tom is convinced he knows her, but she’s going by a different name and a different biography – and she’s not acknowledging that she knows him. FRANK & LOLA. Directed by Matthew Ross. Starring: Michael Shannon. Imogen Potts. A psychosexual noir story set in Las Vegas and Paris. INDIGNATION. Directed by James Schamus. Starring: Logan Lerman. Sarah Gadon. 1951. Among the new arrivals at Winesburg College in Ohio are the son of a kosher butcher and the beautiful, brilliant daughter of a prominent alum. An emotionally soaring film based on the novel by Philip Roth. WIENER-DOG. Directed by Todd Solondz. Starring: Great Gerwig. Kieran Culkin. Danny DeVito. Julie Delpy. Several stories featuring people who find their life inspired or changed by one particular dachshund, who seems to be spreading comfort & joy. UNLOCKING THE CAGE. Directed by Chris Hegedus, Donn Pennebaker. Documentary. Animal rights lawyer Steven Wise and his unprecedented challenge to break down the legal wall that separates animals from humans. MAGGIE’S PLAN. Directed by Rebecca Miller. Starring: Greta Gerwig Gerwig. Ethan Hawke. Julianne Moore. Bill Hader. A young woman’s determination to have a child catapults her into a nervy love triangle with a heart-throb academic and his eccentric critical-theorist wife.