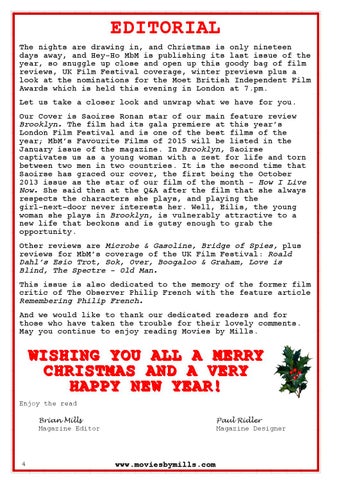 EDITORIAL The nights are drawing in, and Christmas is only nineteen days away, and Hey-Ho MbM is publishing its last issue of the year, so snuggle up close and open up this goody bag of film reviews, UK Film Festival coverage, winter previews plus a look at the nominations for the Moet British Independent Film Awards which is held this evening in London at 7.pm. Let us take a closer look and unwrap what we have for you. Our Cover is Saoirse Ronan star of our main feature review Brooklyn. The film had its gala premiere at this year’s London Film Festival and is one of the best films of the year; MbM’s Favourite Films of 2015 will be listed in the January issue of the magazine. In Brooklyn, Saoirse captivates us as a young woman with a zest for life and torn between two men in two countries. It is the second time that Saoirse has graced our cover, the first being the October 2013 issue as the star of our film of the month – How I Live Now. She said then at the Q&A after the film that she always respects the characters she plays, and playing the girl-next-door never interests her. Well, Eilis, the young woman she plays in Brooklyn, is vulnerably attractive to a new life that beckons and is gutsy enough to grab the opportunity. Other reviews are Microbe & Gasoline, Bridge of Spies, plus reviews for MbM’s coverage of the UK Film Festival: Roald Dahl’s Esio Trot, Sok, Over, Boogaloo & Graham, Love is Blind, The Spectre – Old Man. This issue is also dedicated to the memory of the former film critic of The Observer Philip French with the feature article Remembering Philip French.

And we would like to thank our dedicated readers and for those who have taken the trouble for their lovely comments. May you continue to enjoy reading Movies by Mills.

WISHING YOU ALL A MERRY CHRISTMAS AND A VERY HAPPY NEW YEAR! Enjoy the read Brian Mills Magazine Editor