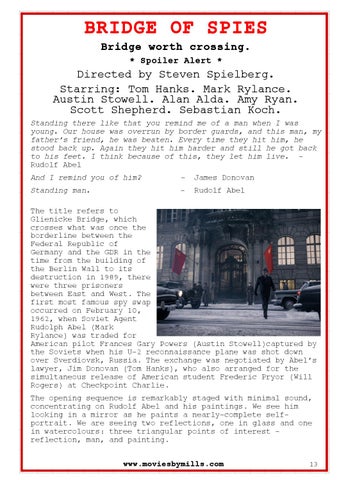 Directed by Steven Spielberg. Starring: Tom Hanks. Mark Rylance. Austin Stowell. Alan Alda. Amy Ryan. Scott Shepherd. Sebastian Koch. Standing there like that you remind me of a man when I was young. Our house was overrun by border guards, and this man, my father’s friend, he was beaten. Every time they hit him, he stood back up. Again they hit him harder and still he got back to his feet. I think because of this, they let him live. – Rudolf Abel And I remind you of him?

The title refers to Glienicke Bridge, which crosses what was once the borderline between the Federal Republic of Germany and the GDR in the time from the building of the Berlin Wall to its destruction in 1989, there were three prisoners between East and West. The first most famous spy swap occurred on February 10, 1962, when Soviet Agent Rudolph Abel (Mark Rylance) was traded for American pilot Frances Gary Powers (Austin Stowell)captured by the Soviets when his U-2 reconnaissance plane was shot down over Sverdiovsk, Russia. The exchange was negotiated by Abel’s lawyer, Jim Donovan (Tom Hanks), who also arranged for the simultaneous release of American student Frederic Pryor (Will Rogers) at Checkpoint Charlie. The opening sequence is remarkably staged with minimal sound, concentrating on Rudolf Abel and his paintings. We see him looking in a mirror as he paints a nearly-complete selfportrait. We are seeing two reflections, one in glass and one in watercolours: three triangular points of interest – reflection, man, and painting.