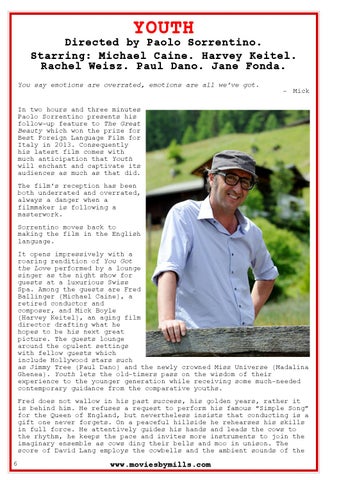 In two hours and three minutes Paolo Sorrentino presents his follow-up feature to The Great Beauty which won the prize for Best Foreign Language Film for Italy in 2013. Consequently his latest film comes with much anticipation that Youth will enchant and captivate its audiences as much as that did. The film’s reception has been both underrated and overrated, always a danger when a filmmaker is following a masterwork. Sorrentino moves back to making the film in the English language. It opens impressively with a roaring rendition of You Got the Love performed by a lounge singer as the night show for guests at a luxurious Swiss Spa. Among the guests are Fred Ballinger (Michael Caine), a retired conductor and composer, and Mick Boyle (Harvey Keitel), an aging film director drafting what he hopes to be his next great picture. The guests lounge around the opulent settings with fellow guests which include Hollywood stars such as Jimmy Tree (Paul Dano) and the newly crowned Miss Universe (Madalina Ghenea). Youth lets the old-timers pass on the wisdom of their experience to the younger generation while receiving some much-needed contemporary guidance from the comparative youths. Fred does not wallow in his past success, his golden years, rather it is behind him. He refuses a request to perform his famous “Simple Song” for the Queen of England, but nevertheless insists that conducting is a gift one never forgets. On a peaceful hillside he rehearses his skills in full force. He attentively guides his hands and leads the cows to the rhythm, he keeps the pace and invites more instruments to join the imaginary ensemble as cows ding their bells and moo in unison. The score of David Lang employs the cowbells and the ambient sounds of the 6