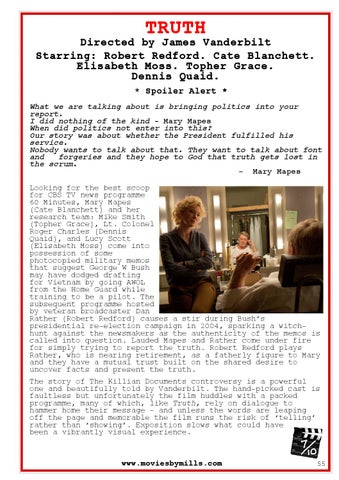 TRUTH Directed by James Vanderbilt Starring: Robert Redford. Cate Blanchett. Elisabeth Moss. Topher Grace. Dennis Quaid. * Spoiler Alert * What we are talking about is bringing politics into your report. I did nothing of the kind – Mary Mapes When did politics not enter into this? Our story was about whether the President fulfilled his service. Nobody wants to talk about that. They want to talk about font and forgeries and they hope to God that truth gets lost in the scrum. - Mary Mapes Looking for the best scoop for CBS TV news programme 60 Minutes, Mary Mapes (Cate Blanchett) and her research team: Mike Smith (Topher Grace), Lt. Colonel Roger Charles (Dennis Quaid), and Lucy Scott (Elisabeth Moss) come into possession of some photocopied military memos that suggest George W Bush may have dodged drafting for Vietnam by going AWOL from the Home Guard while training to be a pilot. The subsequent programme hosted by veteran broadcaster Dan Rather (Robert Redford) causes a stir during Bush’s presidential re-election campaign in 2004, sparking a witchhunt against the newsmakers as the authenticity of the memos is called into question. Lauded Mapes and Rather come under fire for simply trying to report the truth. Robert Redford plays Rather, who is nearing retirement, as a fatherly figure to Mary and they have a mutual trust built on the shared desire to uncover facts and present the truth. The story of The Killian Documents controversy is a powerful one and beautifully told by Vanderbilt. The hand-picked cast is faultless but unfortunately the film huddles with a packed programme, many of which, like Truth, rely on dialogue to hammer home their message – and unless the words are leaping off the page and memorable the film runs the risk of ‘telling’ rather than ‘showing’. Exposition slows what could have been a vibrantly visual experience.