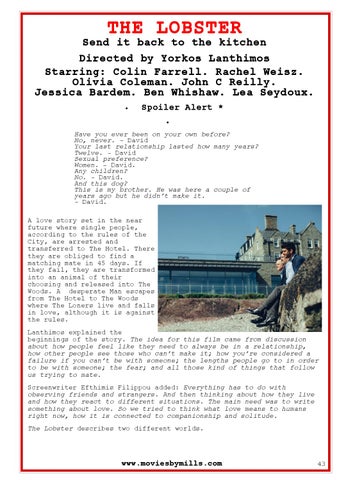 Have you ever been on your own before? No, never. – David Your last relationship lasted how many years? Twelve. – David Sexual preference? Women. – David. Any children? No. – David. And this dog? This is my brother. He was here a couple of years ago but he didn’t make it. – David.

A love story set in the near future where single people, according to the rules of the City, are arrested and transferred to The Hotel. There they are obliged to find a matching mate in 45 days. If they fail, they are transformed into an animal of their choosing and released into The Woods. A desperate Man escapes from The Hotel to The Woods where The Loners live and falls in love, although it is against the rules. Lanthimos explained the beginnings of the story. The idea for this film came from discussion about how people feel like they need to always be in a relationship, how other people see those who can’t make it; how you’re considered a failure if you can’t be with someone; the lengths people go to in order to be with someone; the fear; and all those kind of things that follow us trying to mate. Screenwriter Efthimis Filippou added: Everything has to do with observing friends and strangers. And then thinking about how they live and how they react to different situations. The main need was to write something about love. So we tried to think what love means to humans right now, how it is connected to companionship and solitude. The Lobster describes two different worlds.