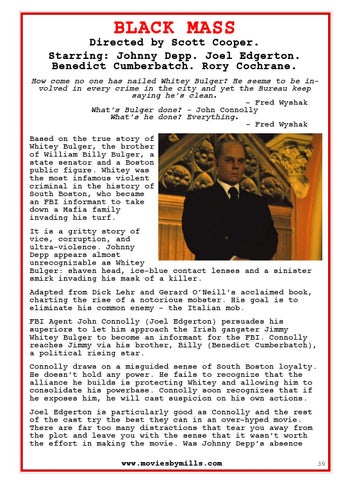 BLACK MASS Directed by Scott Cooper. Starring: Johnny Depp. Joel Edgerton. Benedict Cumberbatch. Rory Cochrane. How come no one has nailed Whitey Bulger? He seems to be involved in every crime in the city and yet the Bureau keep saying he’s clean. – Fred Wyshak What’s Bulger done? – John Connolly What’s he done? Everything. – Fred Wyshak Based on the true story of Whitey Bulger, the brother of William Billy Bulger, a state senator and a Boston public figure. Whitey was the most infamous violent criminal in the history of South Boston, who became an FBI informant to take down a Mafia family invading his turf. It is a gritty story of vice, corruption, and ultra-violence. Johnny Depp appears almost unrecognizable as Whitey Bulger: shaven head, ice-blue contact lenses and a sinister smirk invading his mask of a killer. Adapted from Dick Lehr and Gerard O’Neill’s acclaimed book, charting the rise of a notorious mobster. His goal is to eliminate his common enemy – the Italian mob. FBI Agent John Connolly (Joel Edgerton) persuades his superiors to let him approach the Irish gangster Jimmy Whitey Bulger to become an informant for the FBI. Connolly reaches Jimmy via his brother, Billy (Benedict Cumberbatch), a political rising star. Connolly draws on a misguided sense of South Boston loyalty. He doesn’t hold any power. He fails to recognize that the alliance he builds is protecting Whitey and allowing him to consolidate his powerbase. Connolly soon recognizes that if he exposes him, he will cast suspicion on his own actions. Joel Edgerton is particularly good as Connolly and the rest of the cast try the best they can in an over-hyped movie. There are far too many distractions that tear you away from the plot and leave you with the sense that it wasn’t worth the effort in making the movie. Was Johnny Depp’s absence www.moviesbymills.com