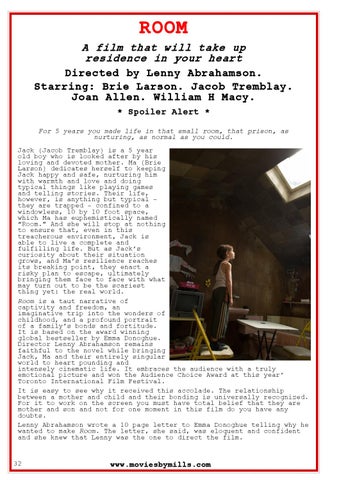 ROOM A film that will take up residence in your heart Directed by Lenny Abrahamson. Starring: Brie Larson. Jacob Tremblay. Joan Allen. William H Macy. * Spoiler Alert * For 5 years you made life in that small room, that prison, as nurturing, as normal as you could. Jack (Jacob Tremblay) is a 5 year old boy who is looked after by his loving and devoted mother. Ma (Brie Larson) dedicates herself to keeping Jack happy and safe, nurturing him with warmth and love and doing typical things like playing games and telling stories. Their life, however, is anything but typical – they are trapped – confined to a windowless, 10 by 10 foot space, which Ma has euphemistically named “Room.” And she will stop at nothing to ensure that, even in this treacherous environment, Jack is able to live a complete and fulfilling life. But as Jack’s curiosity about their situation grows, and Ma’s resilience reaches its breaking point, they enact a risky plan to escape, ultimately bringing them face to face with what may turn out to be the scariest thing yet: the real world. Room is a taut narrative of captivity and freedom, an imaginative trip into the wonders of childhood, and a profound portrait of a family’s bonds and fortitude. It is based on the award winning global bestseller by Emma Donoghue. Director Lenny Abrahamson remains faithful to the novel while bringing Jack, Ma and their entirely singular world to heart pounding and intensely cinematic life. It embraces the audience with a truly emotional picture and won the Audience Choice Award at this year’ Toronto International Film Festival. It is easy to see why it received this accolade. The relationship between a mother and child and their bonding is universally recognized. For it to work on the screen you must have total belief that they are mother and son and not for one moment in this film do you have any doubts. Lenny Abrahamson wrote a 10 page letter to Emma Donoghue telling why he wanted to make Room. The letter, she said, was eloquent and confident and she knew that Lenny was the one to direct the film.