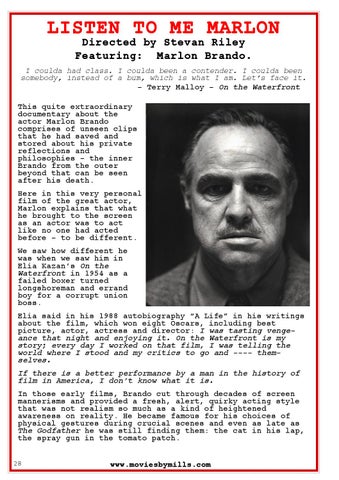 LISTEN TO ME MARLON Directed by Stevan Riley Featuring: Marlon Brando. I coulda had class. I coulda been a contender. I coulda been somebody, instead of a bum, which is what I am. Let’s face it. - Terry Malloy – On the Waterfront

This quite extraordinary documentary about the actor Marlon Brando comprises of unseen clips that he had saved and stored about his private reflections and philosophies – the inner Brando from the outer beyond that can be seen after his death. Here in this very personal film of the great actor, Marlon explains that what he brought to the screen as an actor was to act like no one had acted before – to be different. We saw how different he was when we saw him in Elia Kazan’s On the Waterfront in 1954 as a failed boxer turned longshoreman and errand boy for a corrupt union boss. Elia said in his 1988 autobiography “A Life” in his writings about the film, which won eight Oscars, including best picture, actor, actress and director: I was tasting vengeance that night and enjoying it. On the Waterfront is my story; every day I worked on that film, I was telling the world where I stood and my critics to go and ---- themselves. If there is a better performance by a man in the history of film in America, I don’t know what it is. In those early films, Brando cut through decades of screen mannerisms and provided a fresh, alert, quirky acting style that was not realism so much as a kind of heightened awareness on reality. He became famous for his choices of physical gestures during crucial scenes and even as late as The Godfather he was still finding them: the cat in his lap, the spray gun in the tomato patch. 28