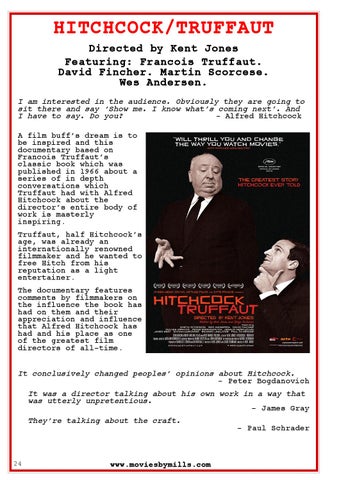 HITCHCOCK/TRUFFAUT Directed by Kent Jones Featuring: Francois Truffaut. David Fincher. Martin Scorcese. Wes Andersen. I am interested in the audience. Obviously they are going to sit there and say ‘Show me. I know what’s coming next’. And I have to say. Do you? - Alfred Hitchcock A film buff’s dream is to be inspired and this documentary based on Francois Truffaut’s classic book which was published in 1966 about a series of in depth conversations which Truffaut had with Alfred Hitchcock about the director’s entire body of work is masterly inspiring. Truffaut, half Hitchcock’s age, was already an internationally renowned filmmaker and he wanted to free Hitch from his reputation as a light entertainer. The documentary features comments by filmmakers on the influence the book has had on them and their appreciation and influence that Alfred Hitchcock has had and his place as one of the greatest film directors of all-time. It conclusively changed peoples’ opinions about Hitchcock. - Peter Bogdanovich It was a director talking about his own work in a way that was utterly unpretentious. - James Gray They’re talking about the craft. - Paul Schrader