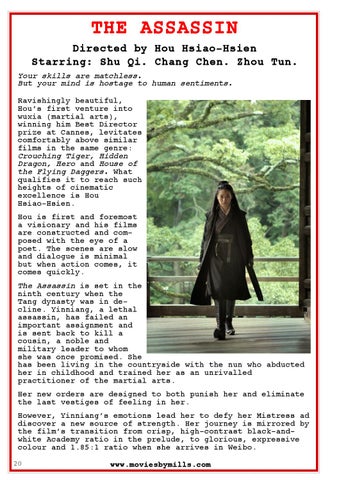 THE ASSASSIN Directed by Hou Hsiao-Hsien Starring: Shu Qi. Chang Chen. Zhou Tun. Your skills are matchless. But your mind is hostage to human sentiments. Ravishingly beautiful, Hou’s first venture into wuxia (martial arts), winning him Best Director prize at Cannes, levitates comfortably above similar films in the same genre: Crouching Tiger, Hidden Dragon, Hero and House of the Flying Daggers. What qualifies it to reach such heights of cinematic excellence is Hou Hsiao-Hsien. Hou is first and foremost a visionary and his films are constructed and composed with the eye of a poet. The scenes are slow and dialogue is minimal but when action comes, it comes quickly. The Assassin is set in the ninth century when the Tang dynasty was in decline. Yinniang, a lethal assassin, has failed an important assignment and is sent back to kill a cousin, a noble and military leader to whom she was once promised. She has been living in the countryside with the nun who abducted her in childhood and trained her as an unrivalled practitioner of the martial arts. Her new orders are designed to both punish her and eliminate the last vestiges of feeling in her. However, Yinniang’s emotions lead her to defy her Mistress ad discover a new source of strength. Her journey is mirrored by the film’s transition from crisp, high-contrast black-andwhite Academy ratio in the prelude, to glorious, expressive colour and 1.85:1 ratio when she arrives in Weibo. 20