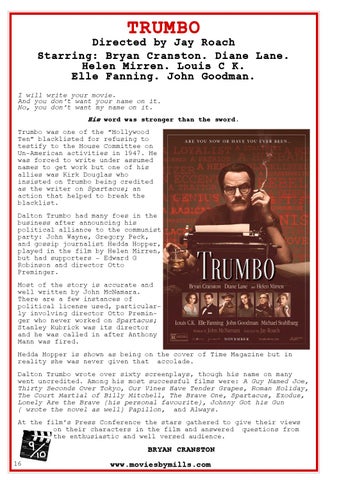 TRUMBO Directed by Jay Roach Starring: Bryan Cranston. Diane Lane. Helen Mirren. Louis C K. Elle Fanning. John Goodman. I will write your movie. And you don’t want your name on it. No, you don’t want my name on it.

His word was stronger than the sword. Trumbo was one of the “Hollywood Ten” blacklisted for refusing to testify to the House Committee on Un-American activities in 1947. He was forced to write under assumed names to get work but one of his allies was Kirk Douglas who insisted on Trumbo being credited as the writer on Spartacus; an action that helped to break the blacklist. Dalton Trumbo had many foes in the business after announcing his political alliance to the communist party: John Wayne, Gregory Peck, and gossip journalist Hedda Hopper, played in the film by Helen Mirren, but had supporters – Edward G Robinson and director Otto Preminger. Most of the story is accurate and well written by John McNamara. There are a few instances of political license used, particularly involving director Otto Preminger who never worked on Spartacus; Stanley Kubrick was its director and he was called in after Anthony Mann was fired. Hedda Hopper is shown as being on the cover of Time Magazine but in reality she was never given that accolade. Dalton Trumbo wrote over sixty screenplays, though his name on many went uncredited. Among his most successful films were: A Guy Named Joe, Thirty Seconds Over Tokyo, Our Vines Have Tender Grapes, Roman Holiday, The Court Martial of Billy Mitchell, The Brave One, Spartacus, Exodus, Lonely Are the Brave (his personal favourite), Johnny Got his Gun ( wrote the novel as well) Papillon, and Always. At the film’s Press Conference the stars gathered to give their views on their characters in the film and answered questions from the enthusiastic and well versed audience.