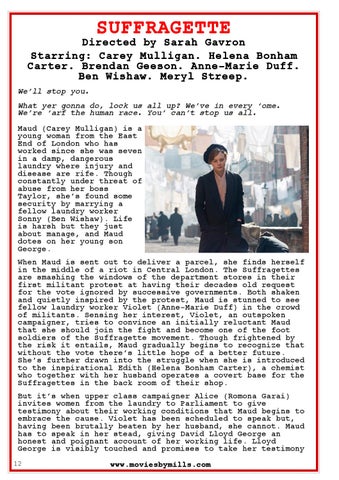 Maud (Carey Mulligan) is a young woman from the East End of London who has worked since she was seven in a damp, dangerous laundry where injury and disease are rife. Though constantly under threat of abuse from her boss Taylor, she’s found some security by marrying a fellow laundry worker Sonny (Ben Wishaw). Life is harsh but they just about manage, and Maud dotes on her young son George. When Maud is sent out to deliver a parcel, she finds herself in the middle of a riot in Central London. The Suffragettes are smashing the windows of the department stores in their first militant protest at having their decades old request for the vote ignored by successive governments. Both shaken and quietly inspired by the protest, Maud is stunned to see fellow laundry worker Violet (Anne-Marie Duff) in the crowd of militants. Sensing her interest, Violet, an outspoken campaigner, tries to convince an initially reluctant Maud that she should join the fight and become one of the foot soldiers of the Suffragette movement. Though frightened by the risk it entails, Maud gradually begins to recognize that without the vote there’s little hope of a better future. She’s further drawn into the struggle when she is introduced to the inspirational Edith (Helena Bonham Carter), a chemist who together with her husband operates a covert base for the Suffragettes in the back room of their shop. But it’s when upper class campaigner Alice (Romona Garai) invites women from the laundry to Parliament to give testimony about their working conditions that Maud begins to embrace the cause. Violet has been scheduled to speak but, having been brutally beaten by her husband, she cannot. Maud has to speak in her stead, giving David Lloyd George an honest and poignant account of her working life. Lloyd George is visibly touched and promises to take her testimony 12