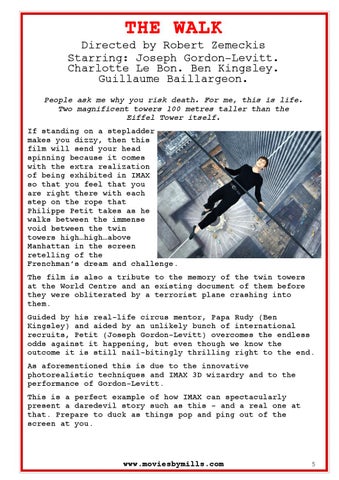 THE WALK Directed by Robert Zemeckis Starring: Joseph Gordon-Levitt. Charlotte Le Bon. Ben Kingsley. Guillaume Baillargeon. People ask me why you risk death. For me, this is life. Two magnificent towers 100 metres taller than the Eiffel Tower itself.

If standing on a stepladder makes you dizzy, then this film will send your head spinning because it comes with the extra realization of being exhibited in IMAX so that you feel that you are right there with each step on the rope that Philippe Petit takes as he walks between the immense void between the twin towers high…high…above Manhattan in the screen retelling of the Frenchman’s dream and challenge. The film is also a tribute to the memory of the twin towers at the World Centre and an existing document of them before they were obliterated by a terrorist plane crashing into them. Guided by his real-life circus mentor, Papa Rudy (Ben Kingsley) and aided by an unlikely bunch of international recruits, Petit (Joseph Gordon-Levitt) overcomes the endless odds against it happening, but even though we know the outcome it is still nail-bitingly thrilling right to the end. As aforementioned this is due to the innovative photorealistic techniques and IMAX 3D wizardry and to the performance of Gordon-Levitt. This is a perfect example of how IMAX can spectacularly present a daredevil story such as this – and a real one at that. Prepare to duck as things pop and ping out of the screen at you.