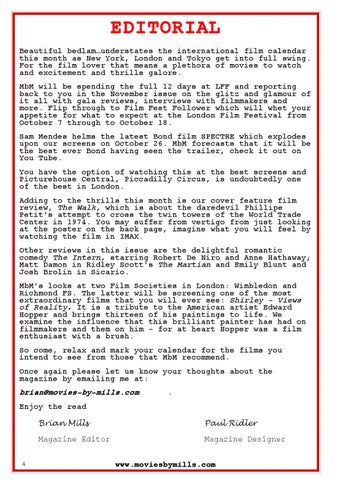 EDITORIAL Beautiful bedlam…understates the international film calendar this month as New York, London and Tokyo get into full swing. For the film lover that means a plethora of movies to watch and excitement and thrills galore. MbM will be spending the full 12 days at LFF and reporting back to you in the November issue on the glitz and glamour of it all with gala reviews, interviews with filmmakers and more. Flip through to Film Fest Follower which will whet your appetite for what to expect at the London Film Festival from October 7 through to October 18. Sam Mendes helms the latest Bond film SPECTRE which explodes upon our screens on October 26. MbM forecasts that it will be the best ever Bond having seen the trailer, check it out on You Tube. You have the option of watching this at the best screens and Picturehouse Central, Piccadilly Circus, is undoubtedly one of the best in London. Adding to the thrills this month is our cover feature film review, The Walk, which is about the daredevil Phillipe Petit’s attempt to cross the twin towers of the World Trade Center in 1974. You may suffer from vertigo from just looking at the poster on the back page, imagine what you will feel by watching the film in IMAX. Other reviews in this issue are the delightful romantic comedy The Intern, starring Robert De Niro and Anne Hathaway; Matt Damon in Ridley Scott’s The Martian and Emily Blunt and Josh Brolin in Sicario. MbM’s looks at two Film Societies in London: Wimbledon and Richmond FS. The latter will be screening one of the most extraordinary films that you will ever see: Shirley – Views of Reality. It is a tribute to the American artist Edward Hopper and brings thirteen of his paintings to life. We examine the influence that this brilliant painter has had on filmmakers and them on him - for at heart Hopper was a film enthusiast with a brush. So come, relax and mark your calendar for the films you intend to see from those that MbM recommend. Once again please let us know your thoughts about the magazine by emailing me at: