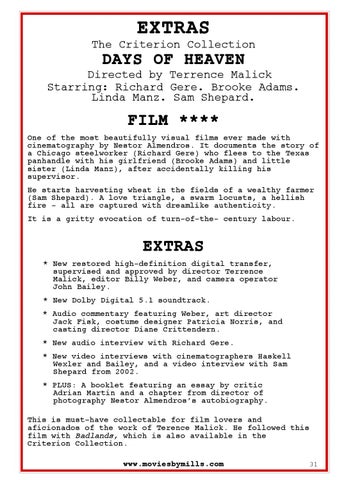 FILM **** One of the most beautifully visual films ever made with cinematography by Nestor Almendros. It documents the story of a Chicago steelworker (Richard Gere) who flees to the Texas panhandle with his girlfriend (Brooke Adams) and little sister (Linda Manz), after accidentally killing his supervisor. He starts harvesting wheat in the fields of a wealthy farmer (Sam Shepard). A love triangle, a swarm locusts, a hellish fire â&amp;#x20AC;&amp;#x201C; all are captured with dreamlike authenticity.

It is a gritty evocation of turn-of-the- century labour.

* Audio commentary featuring Weber, art director Jack Fisk, costume designer Patricia Norris, and casting director Diane Crittendern. * New audio interview with Richard Gere. * New video interviews with cinematographers Haskell Wexler and Bailey, and a video interview with Sam Shepard from 2002. * PLUS: A booklet featuring an essay by critic Adrian Martin and a chapter from director of photography Nestor Almendrosâ&amp;#x20AC;&amp;#x2122;s autobiography. This is must-have collectable for film lovers and aficionados of the work of Terence Malick. He followed this film with Badlands, which is also available in the Criterion Collection. www.moviesbymills.com