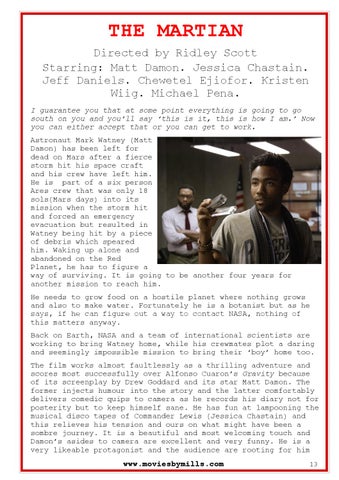 THE MARTIAN Directed by Ridley Scott Starring: Matt Damon. Jessica Chastain. Jeff Daniels. Chewetel Ejiofor. Kristen Wiig. Michael Pena. I guarantee you that at some point everything is going to go south on you and you’ll say ‘this is it, this is how I am.’ Now you can either accept that or you can get to work. Astronaut Mark Watney (Matt Damon) has been left for dead on Mars after a fierce storm hit his space craft and his crew have left him. He is part of a six person Ares crew that was only 18 sols(Mars days) into its mission when the storm hit and forced an emergency evacuation but resulted in Watney being hit by a piece of debris which speared him. Waking up alone and abandoned on the Red Planet, he has to figure a way of surviving. It is going to be another four years for another mission to reach him. He needs to grow food on a hostile planet where nothing grows and also to make water. Fortunately he is a botanist but as he says, if he can figure out a way to contact NASA, nothing of this matters anyway. Back on Earth, NASA and a team of international scientists are working to bring Watney home, while his crewmates plot a daring and seemingly impossible mission to bring their ‘boy’ home too. The film works almost faultlessly as a thrilling adventure and scores most successfully over Alfonso Cuaron’s Gravity because of its screenplay by Drew Goddard and its star Matt Damon. The former injects humour into the story and the latter comfortably delivers comedic quips to camera as he records his diary not for posterity but to keep himself sane. He has fun at lampooning the musical disco tapes of Commander Lewis (Jessica Chastain) and this relieves his tension and ours on what might have been a sombre journey. It is a beautiful and most welcoming touch and Damon’s asides to camera are excellent and very funny. He is a very likeable protagonist and the audience are rooting for him