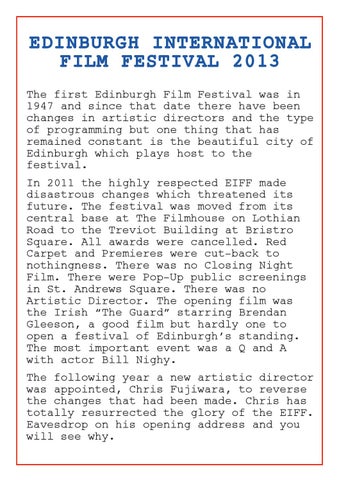 EDINBURGH INTERNATIONAL FILM FESTIVAL 2013 The first Edinburgh Film Festival was in 1947 and since that date there have been changes in artistic directors and the type of programming but one thing that has remained constant is the beautiful city of Edinburgh which plays host to the festival. In 2011 the highly respected EIFF made disastrous changes which threatened its future. The festival was moved from its central base at The Filmhouse on Lothian Road to the Treviot Building at Bristro Square. All awards were cancelled. Red Carpet and Premieres were cut-back to nothingness. There was no Closing Night Film. There were Pop-Up public screenings in St. Andrews Square. There was no Artistic Director. The opening film was the Irish “The Guard” starring Brendan Gleeson, a good film but hardly one to open a festival of Edinburgh’s standing. The most important event was a Q and A with actor Bill Nighy. The following year a new artistic director was appointed, Chris Fujiwara, to reverse the changes that had been made. Chris has totally resurrected the glory of the EIFF. Eavesdrop on his opening address and you will see why.