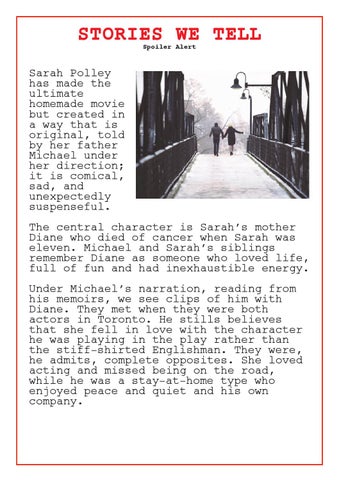 Sarah Polley has made the ultimate homemade movie but created in a way that is original, told by her father Michael under her direction; it is comical, sad, and unexpectedly suspenseful. The central character is Sarah’s mother Diane who died of cancer when Sarah was eleven. Michael and Sarah’s siblings remember Diane as someone who loved life, full of fun and had inexhaustible energy. Under Michael’s narration, reading from his memoirs, we see clips of him with Diane. They met when they were both actors in Toronto. He stills believes that she fell in love with the character he was playing in the play rather than the stiff-shirted Englishman. They were, he admits, complete opposites. She loved acting and missed being on the road, while he was a stay-at-home type who enjoyed peace and quiet and his own company.