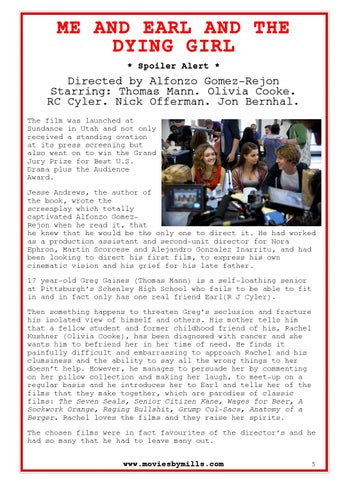 ME AND EARL AND THE DYING GIRL * Spoiler Alert *

Directed by Alfonzo Gomez-Rejon Starring: Thomas Mann. Olivia Cooke. RC Cyler. Nick Offerman. Jon Bernhal. The film was launched at Sundance in Utah and not only received a standing ovation at its press screening but also went on to win the Grand Jury Prize for Best U.S. Drama plus the Audience Award. Jesse Andrews, the author of the book, wrote the screenplay which totally captivated Alfonzo GomezRejon when he read it, that he knew that he would be the only one to direct it. He had worked as a production assistant and second-unit director for Nora Ephron, Martin Scorcese and Alejandro Gonzalez Inarritu, and had been looking to direct his first film, to express his own cinematic vision and his grief for his late father. 17 year-old Greg Gaines (Thomas Mann) is a self-loathing senior at Pittsburgh’s Schenley High School who fails to be able to fit in and in fact only has one real friend Earl(R J Cyler).

Then something happens to threaten Greg’s seclusion and fracture his isolated view of himself and others. His mother tells him that a fellow student and former childhood friend of his, Rachel Kushner (Olivia Cooke), has been diagnosed with cancer and she wants him to befriend her in her time of need. He finds it painfully difficult and embarrassing to approach Rachel and his clumsiness and the ability to say all the wrong things to her doesn’t help. However, he manages to persuade her by commenting on her pillow collection and making her laugh, to meet-up on a regular basis and he introduces her to Earl and tells her of the films that they make together, which are parodies of classic films: The Seven Seals, Senior Citizen Kane, Wages for Beer, A Sockwork Orange, Raging Bullshit, Grump Cul-Sacs, Anatomy of a Berger. Rachel loves the films and they raise her spirits. The chosen films were in fact favourites of the director’s and he had so many that he had to leave many out.