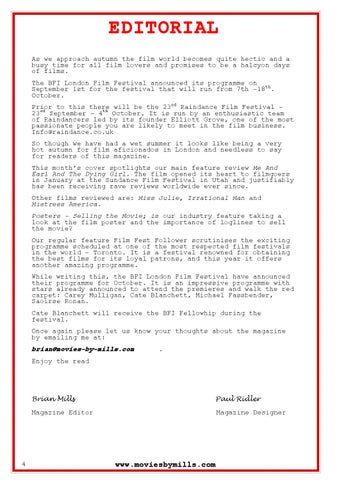 EDITORIAL As we approach autumn the film world becomes quite hectic and a busy time for all film lovers and promises to be a halcyon days of films. The BFI London Film Festival announced its programme on th September 1st for the festival that will run from 7th -18 . October. Prior to this there will be the 23rd Raindance Film Festival – rd th 23 September – 4 October. It is run by an enthusiastic team of Raindancers led by its founder Elliott Grove, one of the most passionate people you are likely to meet in the film business. Info@raindance.co.uk So though we have had a wet summer it looks like being a very hot autumn for film aficionados in London and needless to say for readers of this magazine. This month’s cover spotlights our main feature review Me And Earl And The Dying Girl. The film opened its heart to filmgoers in January at the Sundance Film Festival in Utah and justifiably has been receiving rave reviews worldwide ever since. Other films reviewed are: Miss Julie, Irrational Man and Mistress America. Posters - Selling the Movie; is our industry feature taking a look at the film poster and the importance of loglines to sell the movie? Our regular feature Film Fest Follower scrutinises the exciting programme scheduled at one of the most respected film festivals in the world – Toronto. It is a festival renowned for obtaining the best films for its loyal patrons, and this year it offers another amazing programme. While writing this, the BFI London Film Festival have announced their programme for October. It is an impressive programme with stars already announced to attend the premieres and walk the red carpet: Carey Mulligan, Cate Blanchett, Michael Fassbender, Saoirse Ronan.

Cate Blanchett will receive the BFI Fellowhip during the festival. Once again please let us know your thoughts about the magazine by emailing me at: