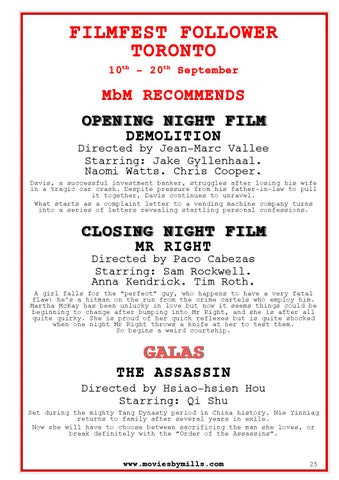 MbM RECOMMENDS OPENING NIGHT FILM DEMOLITION Directed by Jean-Marc Vallee Starring: Jake Gyllenhaal. Naomi Watts. Chris Cooper. Davis, a successful investment banker, struggles after losing his wife in a tragic car crash. Despite pressure from his father-in-law to pull it together, Davis continues to unravel. What starts as a complaint letter to a vending machine company turns into a series of letters revealing startling personal confessions.

CLOSING NIGHT FILM MR RIGHT Directed by Paco Cabezas Starring: Sam Rockwell. Anna Kendrick. Tim Roth. A girl falls for the “perfect” guy, who happens to have a very fatal flaw: he’s a hitman on the run from the crime cartels who employ him. Martha McKay has been unlucky in love but now it seems things could be beginning to change after bumping into Mr Right, and she is after all quite quirky. She is proud of her quick reflexes but is quite shocked when one night Mr Right throws a knife at her to test them. So begins a weird courtship.

GALAS THE ASSASSIN Directed by Hsiao-hsien Hou Starring: Qi Shu Set during the mighty Tang Dynasty period in China history. Nie Yinniag returns to family after several years in exile. Now she will have to choose between sacrificing the man she loves, or break definitely with the “Order of the Assassins”.