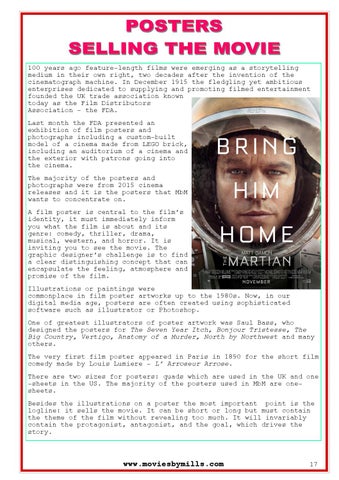 100 years ago feature-length films were emerging as a storytelling medium in their own right, two decades after the invention of the cinematograph machine. In December 1915 the fledgling yet ambitious enterprises dedicated to supplying and promoting filmed entertainment founded the UK trade association known today as the Film Distributors Association – the FDA. Last month the FDA presented an exhibition of film posters and photographs including a custom-built model of a cinema made from LEGO brick, including an auditorium of a cinema and the exterior with patrons going into the cinema. The majority of the posters and photographs were from 2015 cinema releases and it is the posters that MbM wants to concentrate on. A film poster is central to the film’s identity, it must immediately inform you what the film is about and its genre: comedy, thriller, drama, musical, western, and horror. It is inviting you to see the movie. The graphic designer’s challenge is to find a clear distinguishing concept that can encapsulate the feeling, atmosphere and promise of the film. Illustrations or paintings were commonplace in film poster artworks up to the 1980s. Now, in our digital media age, posters are often created using sophisticated software such as illustrator or Photoshop. One of greatest illustrators of poster artwork was Saul Bass, who designed the posters for The Seven Year Itch, Bonjour Tristesse, The Big Country, Vertigo, Anatomy of a Murder, North by Northwest and many others. The very first film poster appeared in Paris in 1890 for the short film comedy made by Louis Lumiere – L’ Arroseur Arrose. There are two sizes for posters: quads which are used in the UK and one -sheets in the US. The majority of the posters used in MbM are onesheets.

Besides the illustrations on a poster the most important point is the logline: it sells the movie. It can be short or long but must contain the theme of the film without revealing too much. It will invariably contain the protagonist, antagonist, and the goal, which drives the story.