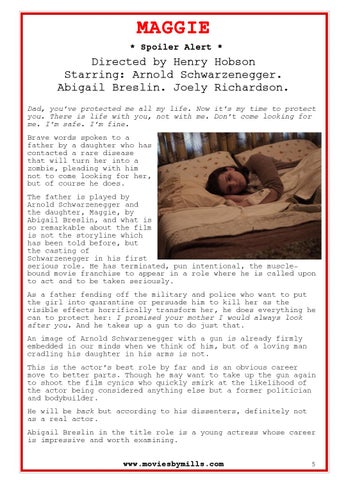 Directed by Henry Hobson Starring: Arnold Schwarzenegger. Abigail Breslin. Joely Richardson. Dad, you’ve protected me all my life. Now it’s my time to protect you. There is life with you, not with me. Don’t come looking for me. I’m safe. I’m fine. Brave words spoken to a father by a daughter who has contacted a rare disease that will turn her into a zombie, pleading with him not to come looking for her, but of course he does. The father is played by Arnold Schwarzenegger and the daughter, Maggie, by Abigail Breslin, and what is so remarkable about the film is not the storyline which has been told before, but the casting of Schwarzenegger in his first serious role. He has terminated, pun intentional, the musclebound movie franchise to appear in a role where he is called upon to act and to be taken seriously. As a father fending off the military and police who want to put the girl into quarantine or persuade him to kill her as the visible effects horrifically transform her, he does everything he can to protect her: I promised your mother I would always look after you. And he takes up a gun to do just that. An image of Arnold Schwarzenegger with a gun is already firmly embedded in our minds when we think of him, but of a loving man cradling his daughter in his arms is not. This is the actor’s best role by far and is an obvious career move to better parts. Though he may want to take up the gun again to shoot the film cynics who quickly smirk at the likelihood of the actor being considered anything else but a former politician and bodybuilder. He will be back but according to his dissenters, definitely not as a real actor. Abigail Breslin in the title role is a young actress whose career is impressive and worth examining.