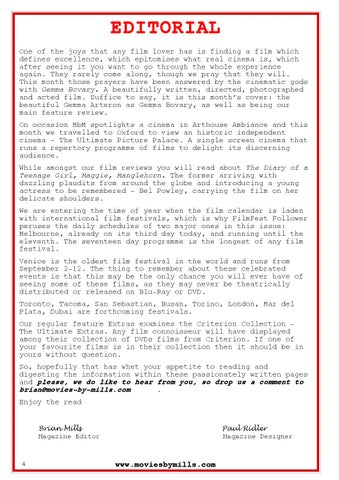 EDITORIAL One of the joys that any film lover has is finding a film which defines excellence, which epitomises what real cinema is, which after seeing it you want to go through the whole experience again. They rarely come along, though we pray that they will. This month those prayers have been answered by the cinematic gods with Gemma Bovary. A beautifully written, directed, photographed and acted film. Suffice to say, it is this month’s cover: the beautiful Gemma Arteron as Gemma Bovary, as well as being our main feature review. On occasion MbM spotlights a cinema in Arthouse Ambiance and this month we travelled to Oxford to view an historic independent cinema – The Ultimate Picture Palace. A single screen cinema that runs a repertory programme of films to delight its discerning audience. While amongst our film reviews you will read about The Diary of a Teenage Girl, Maggie, Manglehorn. The former arriving with dazzling plaudits from around the globe and introducing a young actress to be remembered – Bel Powley, carrying the film on her delicate shoulders. We are entering the time of year when the film calendar is laden with international film festivals, which is why FilmFest Follower peruses the daily schedules of two major ones in this issue: Melbourne, already on its third day today, and running until the eleventh. The seventeen day programme is the longest of any film festival. Venice is the oldest film festival in the world and runs from September 2-12. The thing to remember about these celebrated events is that this may be the only chance you will ever have of seeing some of these films, as they may never be theatrically distributed or released on Blu-Ray or DVD. Toronto, Tacoma, San Sebastian, Busan, Torino, London, Mar del Plata, Dubai are forthcoming festivals. Our regular feature Extras examines the Criterion Collection – The Ultimate Extras. Any film connoisseur will have displayed among their collection of DVDs films from Criterion. If one of your favourite films is in their collection then it should be in yours without question. So, hopefully that has whet your appetite to reading and digesting the information within these passionately written pages and please, we do like to hear from you, so drop us a comment to brian@movies-by-mills.com .