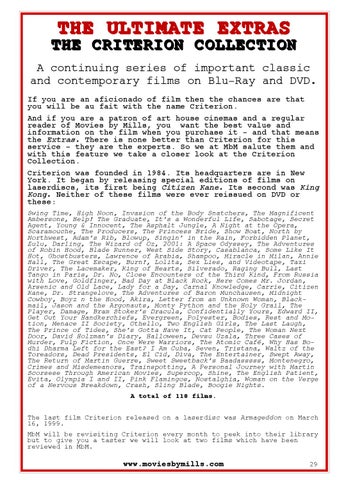 THE CRITERION COLLECTION A continuing series of important classic and contemporary films on Blu-Ray and DVD. If you are an aficionado of film then the chances are that you will be au fait with the name Criterion. And if you are a patron of art house cinemas and a regular reader of Movies by Mills, you want the best value and information on the film when you purchase it - and that means the Extras. There is none better than Criterion for this service - they are the experts. So we at MbM salute them and with this feature we take a closer look at the Criterion Collection. Criterion was founded in 1984. Its headquarters are in New York. It began by releasing special editions of films on laserdiscs, its first being Citizen Kane. Its second was King Kong. Neither of these films were ever reissued on DVD or these: Swing Time, High Noon, Invasion of the Body Snatchers, The Magnificent Ambersons, Help! The Graduate, It’s a Wonderful Life, Sabotage, Secret Agent, Young & Innocent, The Asphalt Jungle, A Night at the Opera, Scaramouche, The Producers, The Princess Bride, Show Boat, North by Northwest, Adam’s Rib, Blowup, Singin’ in the Rain, Forbidden Planet, Zulu, Darling, The Wizard of Oz, 2001: A Space Odyssey, The Adventures of Robin Hood, Blade Runner, West Side Story, Casablanca, Some Like It Hot, Ghostbusters, Lawrence of Arabia, Shampoo, Miracle in Milan, Annie Hall, The Great Escape, Burn!, Lolita, Sex Lies, and Videotape, Taxi Driver, The Lacemaker, King of Hearts, Silverado, Raging Bull, Last Tango in Paris, Dr. No, Close Encounters of the Third Kind, From Russia with Love, Goldfinger, Bad Day at Black Rock, Here Comes Mr. Jordan, Arsenic and Old Lace, Lady for a Day, Carnal Knowledge, Carrie, Citizen Kane, Dr. Strangelove, The Adventures of Baron Munchausen, Midnight Cowboy, Boyz n the Hood, Akira, Letter from an Unknown Woman, Blackmail, Jason and the Argonauts, Monty Python and the Holy Grail, The Player, Damage, Bram Stoker’s Dracula, Confidentially Yours, Edward II, Get Out Your Handkerchiefs, Evergreen, Polyester, Bodies, Rest and Motion, Menace II Society, Othello, Two English Girls, The Last Laugh, The Prince of Tides, She’s Gotta Have It, Cat People, The Woman Next Door, David Holzman’s Diary, Halloween, Devsu Uzala, Three Cases of Murder, Pulp Fiction, Once Were Warriors, The Atomic Café, Why Has Bodhi Dharma Left for the East? I Am Cuba, Seven, Tristana, Waltz of the Toreadors, Dead Presidents, El Cid, Diva, The Entertainer, Swept Away, The Return of Martin Guerre, Sweet Sweetback’s Baadasssss, Montenegro, Crimes and Misdemeanors, Trainspotting, A Personal Journey with Martin Scorsese Through American Movies, Supercop, Shine, The English Patient, Evita, Olympia I and II, Pink Flamingos, Nostalghia, Woman on the Verge of a Nervous Breakdown, Crash, Sling Blade, Boogie Nights. A total of 118 films. The last film Criterion released on a laserdisc was Armageddon on March 16, 1999. MbM will be revisiting Criterion every month to peek into their library but to give you a taster we will look at two films which have been reviewed in MbM.