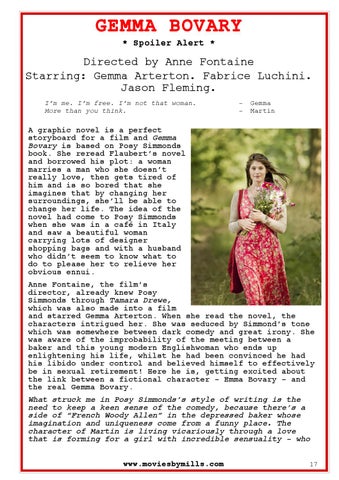 A graphic novel is a perfect storyboard for a film and Gemma Bovary is based on Posy Simmonds book. She reread Flaubert’s novel and borrowed his plot: a woman marries a man who she doesn’t really love, then gets tired of him and is so bored that she imagines that by changing her surroundings, she’ll be able to change her life. The idea of the novel had come to Posy Simmonds when she was in a café in Italy and saw a beautiful woman carrying lots of designer shopping bags and with a husband who didn’t seem to know what to do to please her to relieve her obvious ennui. Anne Fontaine, the film’s director, already knew Posy Simmonds through Tamara Drewe, which was also made into a film and starred Gemma Arterton. When she read the novel, the characters intrigued her. She was seduced by Simmond’s tone which was somewhere between dark comedy and great irony. She was aware of the improbability of the meeting between a baker and this young modern Englishwoman who ends up enlightening his life, whilst he had been convinced he had his libido under control and believed himself to effectively be in sexual retirement! Here he is, getting excited about the link between a fictional character – Emma Bovary – and the real Gemma Bovary. What struck me in Posy Simmonds’s style of writing is the need to keep a keen sense of the comedy, because there’s a side of “French Woody Allen” in the depressed baker whose imagination and uniqueness come from a funny place. The character of Martin is living vicariously through a love that is forming for a girl with incredible sensuality – who www.moviesbymills.com