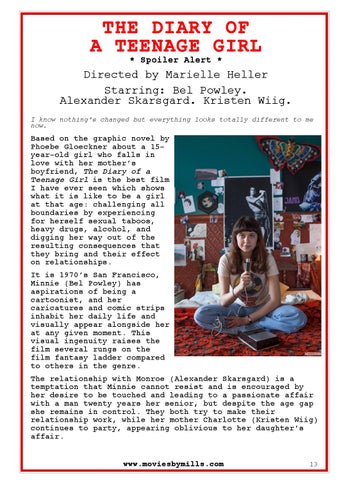 THE DIARY OF A TEENAGE GIRL * Spoiler Alert *

Based on the graphic novel by Phoebe Gloeckner about a 15year-old girl who falls in love with her mother’s boyfriend, The Diary of a Teenage Girl is the best film I have ever seen which shows what it is like to be a girl at that age: challenging all boundaries by experiencing for herself sexual taboos, heavy drugs, alcohol, and digging her way out of the resulting consequences that they bring and their effect on relationships. It is 1970’s San Francisco, Minnie (Bel Powley) has aspirations of being a cartoonist, and her caricatures and comic strips inhabit her daily life and visually appear alongside her at any given moment. This visual ingenuity raises the film several rungs on the film fantasy ladder compared to others in the genre. The relationship with Monroe (Alexander Skarsgard) is a temptation that Minnie cannot resist and is encouraged by her desire to be touched and leading to a passionate affair with a man twenty years her senior, but despite the age gap she remains in control. They both try to make their relationship work, while her mother Charlotte (Kristen Wiig) continues to party, appearing oblivious to her daughter’s affair.