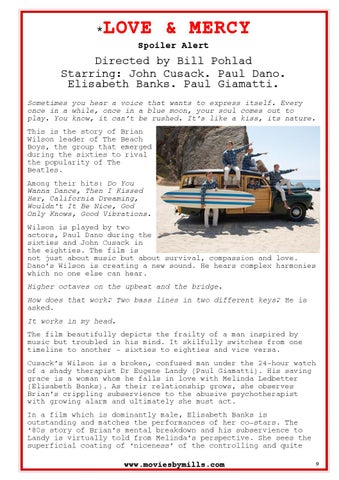 Directed by Bill Pohlad Starring: John Cusack. Paul Dano. Elisabeth Banks. Paul Giamatti. Sometimes you hear a voice that wants to express itself. Every once in a while, once in a blue moon, your soul comes out to play. You know, it can’t be rushed. It’s like a kiss, its nature. This is the story of Brian Wilson leader of The Beach Boys, the group that emerged during the sixties to rival the popularity of The Beatles. Among their hits: Do You Wanna Dance, Then I Kissed Her, California Dreaming, Wouldn’t It Be Nice, God Only Knows, Good Vibrations. Wilson is played by two actors, Paul Dano during the sixties and John Cusack in the eighties. The film is not just about music but about survival, compassion and love. Dano’s Wilson is creating a new sound. He hears complex harmonies which no one else can hear. Higher octaves on the upbeat and the bridge. How does that work? Two bass lines in two different keys? He is asked. It works in my head. The film beautifully depicts the frailty of a man inspired by music but troubled in his mind. It skilfully switches from one timeline to another – sixties to eighties and vice versa. Cusack’s Wilson is a broken, confused man under the 24-hour watch of a shady therapist Dr Eugene Landy (Paul Giamatti). His saving grace is a woman whom he falls in love with Melinda Ledbetter (Elisabeth Banks). As their relationship grows, she observes Brian’s crippling subservience to the abusive psychotherapist with growing alarm and ultimately she must act. In a film which is dominantly male, Elisabeth Banks is outstanding and matches the performances of her co-stars. The ‘80s story of Brian’s mental breakdown and his subservience to Landy is virtually told from Melinda’s perspective. She sees the superficial coating of ‘niceness’ of the controlling and quite