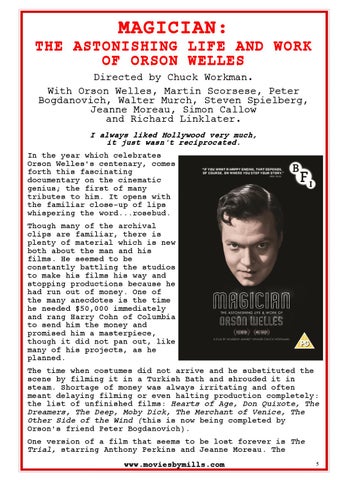 MAGICIAN: THE ASTONISHING LIFE AND WORK OF ORSON WELLES Directed by Chuck Workman. With Orson Welles, Martin Scorsese, Peter Bogdanovich, Walter Murch, Steven Spielberg, Jeanne Moreau, Simon Callow and Richard Linklater. I always liked Hollywood very much, it just wasn't reciprocated. In the year which celebrates Orson Welles's centenary, comes forth this fascinating documentary on the cinematic genius; the first of many tributes to him. It opens with the familiar close-up of lips whispering the word...rosebud. Though many of the archival clips are familiar, there is plenty of material which is new both about the man and his films. He seemed to be constantly battling the studios to make his films his way and stopping productions because he had run out of money. One of the many anecdotes is the time he needed $50,000 immediately and rang Harry Cohn of Columbia to send him the money and promised him a masterpiece, though it did not pan out, like many of his projects, as he planned. The time when costumes did not arrive and he substituted the scene by filming it in a Turkish Bath and shrouded it in steam. Shortage of money was always irritating and often meant delaying filming or even halting production completely: the list of unfinished films: Hearts of Age, Don Quixote, The Dreamers, The Deep, Moby Dick, The Merchant of Venice, The Other Side of the Wind (this is now being completed by Orson's friend Peter Bogdanovich). One version of a film that seems to be lost forever is The Trial, starring Anthony Perkins and Jeanne Moreau. The www.moviesbymills.com