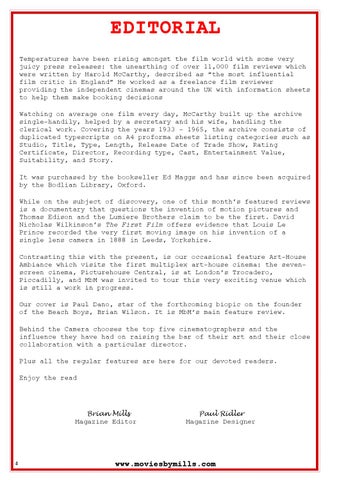 EDITORIAL Temperatures have been rising amongst the film world with some very juicy press releases: the unearthing of over 11,000 film reviews which were written by Harold McCarthy, described as “the most influential film critic in England” He worked as a freelance film reviewer providing the independent cinemas around the UK with information sheets to help them make booking decisions Watching on average one film every day, McCarthy built up the archive single-handily, helped by a secretary and his wife, handling the clerical work. Covering the years 1933 – 1965, the archive consists of duplicated typescripts on A4 proforma sheets listing categories such as Studio, Title, Type, Length, Release Date of Trade Show, Rating Certificate, Director, Recording type, Cast, Entertainment Value, Suitability, and Story. It was purchased by the bookseller Ed Maggs and has since been acquired by the Bodlian Library, Oxford. While on the subject of discovery, one of this month’s featured reviews is a documentary that questions the invention of motion pictures and Thomas Edison and the Lumiere Brothers claim to be the first. David Nicholas Wilkinson’s The First Film offers evidence that Louis Le Prince recorded the very first moving image on his invention of a single lens camera in 1888 in Leeds, Yorkshire. Contrasting this with the present, is our occasional feature Art-House Ambiance which visits the first multiplex art-house cinema: the sevenscreen cinema, Picturehouse Central, is at London’s Trocadero, Piccadilly, and MbM was invited to tour this very exciting venue which is still a work in progress. Our cover is Paul Dano, star of the forthcoming biopic on the founder of the Beach Boys, Brian Wilson. It is MbM’s main feature review. Behind the Camera chooses the top five cinematographers and the influence they have had on raising the bar of their art and their close collaboration with a particular director. Plus all the regular features are here for our devoted readers. Enjoy the read