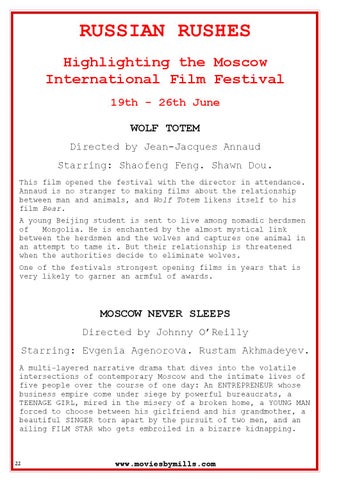 WOLF TOTEM Directed by Jean-Jacques Annaud Starring: Shaofeng Feng. Shawn Dou. This film opened the festival with the director in attendance. Annaud is no stranger to making films about the relationship between man and animals, and Wolf Totem likens itself to his film Bear.

A young Beijing student is sent to live among nomadic herdsmen of Mongolia. He is enchanted by the almost mystical link between the herdsmen and the wolves and captures one animal in an attempt to tame it. But their relationship is threatened when the authorities decide to eliminate wolves. One of the festivals strongest opening films in years that is very likely to garner an armful of awards.

MOSCOW NEVER SLEEPS Directed by Johnny Oâ&#x20AC;&#x2122;Reilly Starring: Evgenia Agenorova. Rustam Akhmadeyev. A multi-layered narrative drama that dives into the volatile intersections of contemporary Moscow and the intimate lives of five people over the course of one day: An ENTREPRENEUR whose business empire come under siege by powerful bureaucrats, a TEENAGE GIRL, mired in the misery of a broken home, a YOUNG MAN forced to choose between his girlfriend and his grandmother, a beautiful SINGER torn apart by the pursuit of two men, and an ailing FILM STAR who gets embroiled in a bizarre kidnapping.