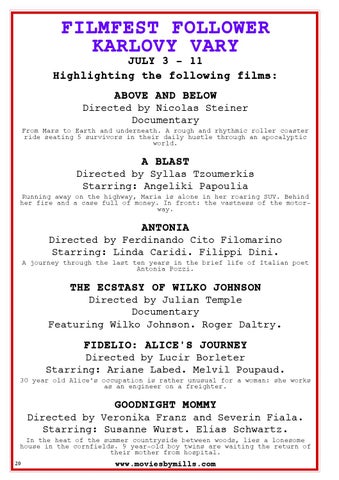 FILMFEST FOLLOWER KARLOVY VARY JULY 3 - 11 Highlighting the following films: ABOVE AND BELOW Directed by Nicolas Steiner Documentary From Mars to Earth and underneath. A rough and rhythmic roller coaster ride seating 5 survivors in their daily hustle through an apocalyptic world.

A BLAST Directed by Syllas Tzoumerkis Starring: Angeliki Papoulia Running away on the highway, Maria is alone in her roaring SUV. Behind her fire and a case full of money. In front: the vastness of the motorway.

FIDELIO: ALICE'S JOURNEY Directed by Lucir Borleter Starring: Ariane Labed. Melvil Poupaud. 30 year old Aliceâ&#x20AC;&#x2122;s occupation is rather unusual for a woman: she works as an engineer on a freighter.

GOODNIGHT MOMMY Directed by Veronika Franz and Severin Fiala. Starring: Susanne Wurst. Elias Schwartz. In the heat of the summer countryside between woods, lies a lonesome house in the cornfields. 9 year-old boy twins are waiting the return of their mother from hospital. 20