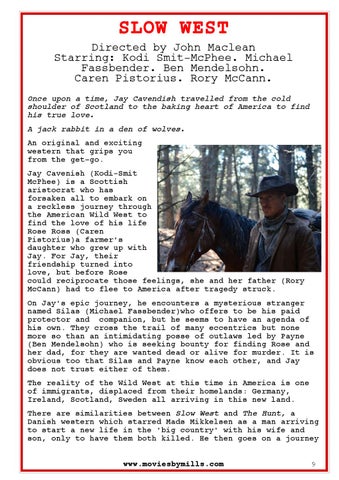 A jack rabbit in a den of wolves. An original and exciting western that grips you from the get-go. Jay Cavenish (Kodi-Smit McPhee) is a Scottish aristocrat who has forsaken all to embark on a reckless journey through the American Wild West to find the love of his life Rose Ross (Caren Pistorius)a farmer's daughter who grew up with Jay. For Jay, their friendship turned into love, but before Rose could reciprocate those feelings, she and her father (Rory McCann) had to flee to America after tragedy struck. On Jay's epic journey, he encounters a mysterious stranger named Silas (Michael Fassbender)who offers to be his paid protector and companion, but he seems to have an agenda of his own. They cross the trail of many eccentrics but none more so than an intimidating posse of outlaws led by Payne (Ben Mendelsohn) who is seeking bounty for finding Rose and her dad, for they are wanted dead or alive for murder. It is obvious too that Silas and Payne know each other, and Jay does not trust either of them. The reality of the Wild West at this time in America is one of immigrants, displaced from their homelands: Germany, Ireland, Scotland, Sweden all arriving in this new land. There are similarities between Slow West and The Hunt, a Danish western which starred Mads Mikkelsen as a man arriving to start a new life in the 'big country' with his wife and son, only to have them both killed. He then goes on a journey www.moviesbymills.com