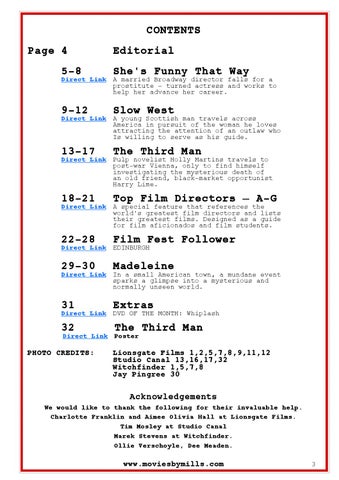 Direct Link A married Broadway director falls for a prostitute - turned actress and works to help her advance her career.

Direct Link A young Scottish man travels across America in pursuit of the woman he loves attracting the attention of an outlaw who Is willing to serve as his guide.

Direct Link A special feature that references the world's greatest film directors and lists their greatest films. Designed as a guide for film aficionados and film students.

Direct Link In a small American town, a mundane event sparks a glimpse into a mysterious and normally unseen world.

Acknowledgements We would like to thank the following for their invaluable help. Charlotte Franklin and Aimee Olivia Hall at Lionsgate Films. Tim Mosley at Studio Canal Marek Stevens at Witchfinder. Ollie Verschoyle, Dee Meaden.