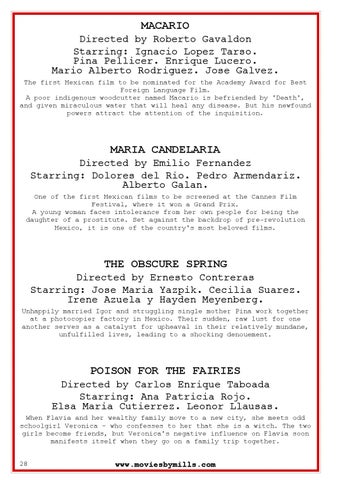 MACARIO Directed by Roberto Gavaldon Starring: Ignacio Lopez Tarso. Pina Pellicer. Enrique Lucero. Mario Alberto Rodriguez. Jose Galvez. The first Mexican film to be nominated for the Academy Award for Best Foreign Language Film. A poor indigenous woodcutter named Macario is befriended by 'Death', and given miraculous water that will heal any disease. But his newfound powers attract the attention of the inquisition.

MARIA CANDELARIA Directed by Emilio Fernandez Starring: Dolores del Rio. Pedro Armendariz. Alberto Galan. One of the first Mexican films to be screened at the Cannes Film Festival, where it won a Grand Prix. A young woman faces intolerance from her own people for being the daughter of a prostitute. Set against the backdrop of pre-revolution Mexico, it is one of the country's most beloved films.

THE OBSCURE SPRING Directed by Ernesto Contreras Starring: Jose Maria Yazpik. Cecilia Suarez. Irene Azuela y Hayden Meyenberg. Unhappily married Igor and struggling single mother Pina work together at a photocopier factory in Mexico. Their sudden, raw lust for one another serves as a catalyst for upheaval in their relatively mundane, unfulfilled lives, leading to a shocking denouement.

POISON FOR THE FAIRIES Directed by Carlos Enrique Taboada Starring: Ana Patricia Rojo. Elsa Maria Cutierrez. Leonor Llausas. When Flavia and her wealthy family move to a new city, she meets odd schoolgirl Veronica - who confesses to her that she is a witch. The two girls become friends, but Veronica's negative influence on Flavia soon manifests itself when they go on a family trip together. 28