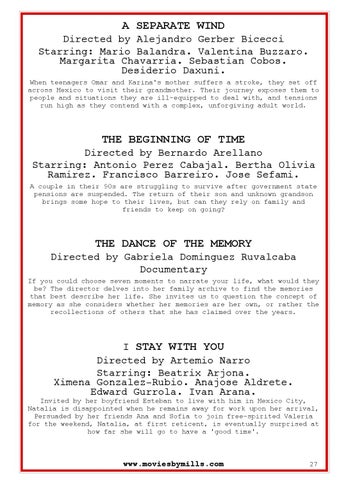 A SEPARATE WIND Directed by Alejandro Gerber Bicecci Starring: Mario Balandra. Valentina Buzzaro. Margarita Chavarria. Sebastian Cobos. Desiderio Daxuni. When teenagers Omar and Karina's mother suffers a stroke, they set off across Mexico to visit their grandmother. Their journey exposes them to people and situations they are ill-equipped to deal with, and tensions run high as they contend with a complex, unforgiving adult world.

THE BEGINNING OF TIME Directed by Bernardo Arellano Starring: Antonio Perez Cabajal. Bertha Olivia Ramirez. Francisco Barreiro. Jose Sefami. A couple in their 90s are struggling to survive after government state pensions are suspended. The return of their son and unknown grandson brings some hope to their lives, but can they rely on family and friends to keep on going?

THE DANCE OF THE MEMORY Directed by Gabriela Dominguez Ruvalcaba Documentary If you could choose seven moments to narrate your life, what would they be? The director delves into her family archive to find the memories that best describe her life. She invites us to question the concept of memory as she considers whether her memories are her own, or rather the recollections of others that she has claimed over the years.

I STAY WITH YOU Directed by Artemio Narro Starring: Beatrix Arjona. Ximena Gonzalez-Rubio. Anajose Aldrete. Edward Gurrola. Ivan Arana. Invited by her boyfriend Esteban to live with him in Mexico City, Natalia is disappointed when he remains away for work upon her arrival, Persuaded by her friends Ana and Sofia to join free-spirited Valeria for the weekend, Natalia, at first reticent, is eventually surprised at how far she will go to have a 'good time'.