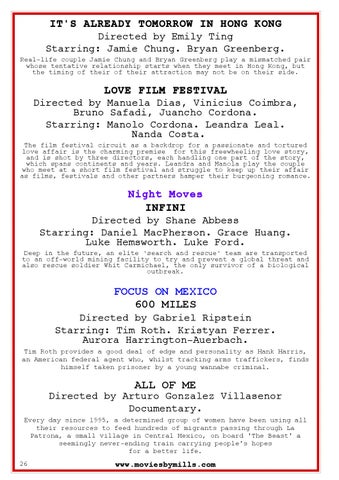 IT'S ALREADY TOMORROW IN HONG KONG Directed by Emily Ting Starring: Jamie Chung. Bryan Greenberg. Real-life couple Jamie Chung and Bryan Greenberg play a mismatched pair whose tentative relationship starts when they meet in Hong Kong, but the timing of their of their attraction may not be on their side.

LOVE FILM FESTIVAL Directed by Manuela Dias, Vinicius Coimbra, Bruno Safadi, Juancho Cordona. Starring: Manolo Cordona. Leandra Leal. Nanda Costa. The film festival circuit as a backdrop for a passionate and tortured love affair is the charming premise for this freewheeling love story, and is shot by three directors, each handling one part of the story, which spans continents and years. Leandra and Manola play the couple who meet at a short film festival and struggle to keep up their affair as films, festivals and other partners hamper their burgeoning romance.

Night Moves INFINI Directed by Shane Abbess Starring: Daniel MacPherson. Grace Huang. Luke Hemsworth. Luke Ford. Deep in the future, an elite 'search and rescue' team are transported to an off-world mining facility to try and prevent a global threat and also rescue soldier Whit Carmichael, the only survivor of a biological outbreak.

ALL OF ME Directed by Arturo Gonzalez Villasenor Documentary. Every day since 1995, a determined group of women have been using all their resources to feed hundreds of migrants passing through La Patrona, a small village in Central Mexico, on board 'The Beast' a seemingly never-ending train carrying people's hopes for a better life. 26