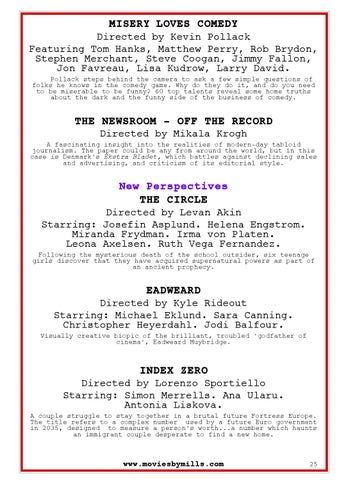 MISERY LOVES COMEDY Directed by Kevin Pollack Featuring Tom Hanks, Matthew Perry, Rob Brydon, Stephen Merchant, Steve Coogan, Jimmy Fallon, Jon Favreau, Lisa Kudrow, Larry David. Pollack steps behind the camera to ask a few simple questions of folks he knows in the comedy game. Why do they do it, and do you need to be miserable to be funny? 60 top talents reveal some home truths about the dark and the funny side of the business of comedy.

THE NEWSROOM - OFF THE RECORD Directed by Mikala Krogh A fascinating insight into the realities of modern-day tabloid journalism. The paper could be any from around the world, but in this case is Denmark's Ekstra Bladet, which battles against declining sales and advertising, and criticism of its editorial style.

INDEX ZERO Directed by Lorenzo Sportiello Starring: Simon Merrells. Ana Ularu. Antonia Liskova. A couple struggle to stay together in a brutal future Fortress Europe. The title refers to a complex number used by a future Euro government in 2035, designed to measure a person's worth...a number which haunts an immigrant couple desperate to find a new home.