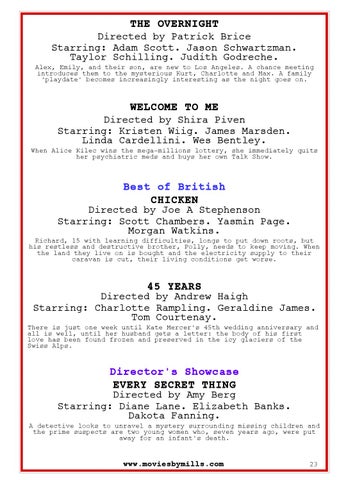 THE OVERNIGHT Directed by Patrick Brice Starring: Adam Scott. Jason Schwartzman. Taylor Schilling. Judith Godreche. Alex, Emily, and their son, are new to Los Angeles. A chance meeting introduces them to the mysterious Kurt, Charlotte and Max. A family 'playdate' becomes increasingly interesting as the night goes on.

Best of British CHICKEN Directed by Joe A Stephenson Starring: Scott Chambers. Yasmin Page. Morgan Watkins. Richard, 15 with learning difficulties, longs to put down roots, but his restless and destructive brother, Polly, needs to keep moving. When the land they live on is bought and the electricity supply to their caravan is cut, their living conditions get worse.

45 YEARS Directed by Andrew Haigh Starring: Charlotte Rampling. Geraldine James. Tom Courtenay. There is just one week until Kate Mercer's 45th wedding anniversary and all is well, until her husband gets a letter: the body of his first love has been found frozen and preserved in the icy glaciers of the Swiss Alps.

Director's Showcase EVERY SECRET THING Directed by Amy Berg Starring: Diane Lane. Elizabeth Banks. Dakota Fanning. A detective looks to unravel a mystery surrounding missing children and the prime suspects are two young women who, seven years ago, were put away for an infant's death.