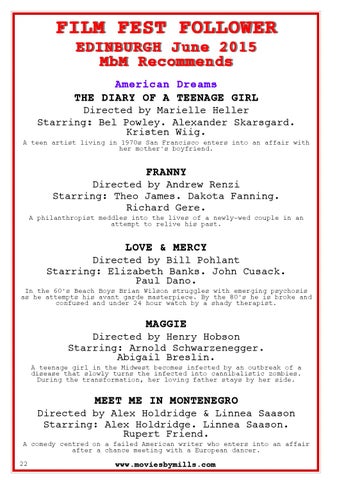 FRANNY Directed by Andrew Renzi Starring: Theo James. Dakota Fanning. Richard Gere. A philanthropist meddles into the lives of a newly-wed couple in an attempt to relive his past.

LOVE & MERCY Directed by Bill Pohlant Starring: Elizabeth Banks. John Cusack. Paul Dano. In the 60's Beach Boys Brian Wilson struggles with emerging psychosis as he attempts his avant garde masterpiece. By the 80's he is broke and confused and under 24 hour watch by a shady therapist.

MAGGIE Directed by Henry Hobson Starring: Arnold Schwarzenegger. Abigail Breslin. A teenage girl in the Midwest becomes infected by an outbreak of a disease that slowly turns the infected into cannibalistic zombies. During the transformation, her loving father stays by her side.

MEET ME IN MONTENEGRO Directed by Alex Holdridge & Linnea Saason Starring: Alex Holdridge. Linnea Saason. Rupert Friend. A comedy centred on a failed American writer who enters into an affair after a chance meeting with a European dancer. 22