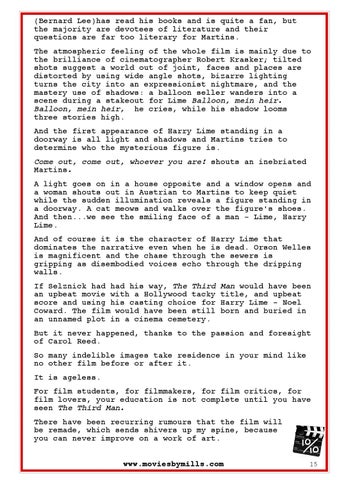 (Bernard Lee)has read his books and is quite a fan, but the majority are devotees of literature and their questions are far too literary for Martins. The atmospheric feeling of the whole film is mainly due to the brilliance of cinematographer Robert Krasker; tilted shots suggest a world out of joint, faces and places are distorted by using wide angle shots, bizarre lighting turns the city into an expressionist nightmare, and the mastery use of shadows: a balloon seller wanders into a scene during a stakeout for Lime Balloon, mein heir. Balloon, mein heir, he cries, while his shadow looms three stories high.

And the first appearance of Harry Lime standing in a doorway is all light and shadows and Martins tries to determine who the mysterious figure is. Come out, come out, whoever you are! shouts an inebriated Martins. A light goes on in a house opposite and a window opens and a woman shouts out in Austrian to Martins to keep quiet while the sudden illumination reveals a figure standing in a doorway. A cat meows and walks over the figure's shoes. And then...we see the smiling face of a man - Lime, Harry Lime. And of course it is the character of Harry Lime that dominates the narrative even when he is dead. Orson Welles is magnificent and the chase through the sewers is gripping as disembodied voices echo through the dripping walls. If Selznick had had his way, The Third an upbeat movie with a Hollywood tacky score and using his casting choice for Coward. The film would have been still an unnamed plot in a cinema cemetery.

Man would have been title, and upbeat Harry Lime - Noel born and buried in

But it never happened, thanks to the passion and foresight of Carol Reed. So many indelible images take residence in your mind like no other film before or after it. It is ageless. For film students, for filmmakers, for film critics, for film lovers, your education is not complete until you have seen The Third Man. There have been recurring rumours that the film will be remade, which sends shivers up my spine, because you can never improve on a work of art. www.moviesbymills.com