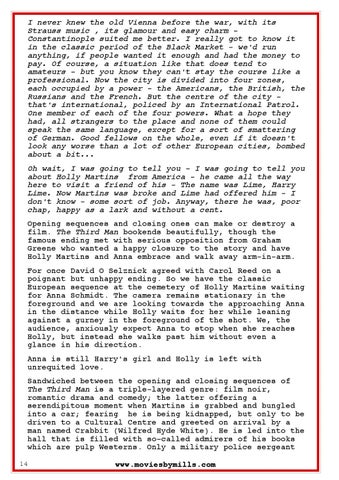 I never knew the old Vienna before the war, with its Strauss music , its glamour and easy charm Constantinople suited me better. I really got to know it in the classic period of the Black Market - we'd run anything, if people wanted it enough and had the money to pay. Of course, a situation like that does tend to amateurs - but you know they can't stay the course like a professional. Now the city is divided into four zones, each occupied by a power - the Americans, the British, the Russians and the French. But the centre of the city that's international, policed by an International Patrol. One member of each of the four powers. What a hope they had, all strangers to the place and none of them could speak the same language, except for a sort of smattering of German. Good fellows on the whole, even if it doesn't look any worse than a lot of other European cities, bombed about a bit... Oh wait, I was going to tell you - I was going to tell you about Holly Martins from America - he came all the way here to visit a friend of his - The name was Lime, Harry Lime. Now Martins was broke and Lime had offered him - I don't know - some sort of job. Anyway, there he was, poor chap, happy as a lark and without a cent. Opening sequences and closing ones can make or destroy a film. The Third Man bookends beautifully, though the famous ending met with serious opposition from Graham Greene who wanted a happy closure to the story and have Holly Martins and Anna embrace and walk away arm-in-arm. For once David O Selznick agreed with Carol Reed on a poignant but unhappy ending. So we have the classic European sequence at the cemetery of Holly Martins waiting for Anna Schmidt. The camera remains stationary in the foreground and we are looking towards the approaching Anna in the distance while Holly waits for her while leaning against a gurney in the foreground of the shot. We, the audience, anxiously expect Anna to stop when she reaches Holly, but instead she walks past him without even a glance in his direction. Anna is still Harry's girl and Holly is left with unrequited love. Sandwiched between the opening and closing sequences of The Third Man is a triple-layered genre: film noir, romantic drama and comedy; the latter offering a serendipitous moment when Martins is grabbed and bungled into a car; fearing he is being kidnapped, but only to be driven to a Cultural Centre and greeted on arrival by a man named Crabbit (Wilfred Hyde White). He is led into the hall that is filled with so-called admirers of his books which are pulp Westerns. Only a military police sergeant 14