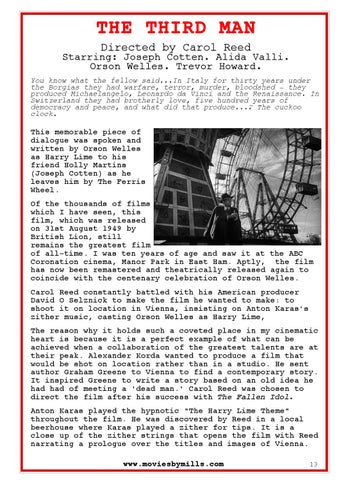 THE THIRD MAN Directed by Carol Reed Starring: Joseph Cotten. Alida Valli. Orson Welles. Trevor Howard. You know what the fellow said...In Italy for thirty years under the Borgias they had warfare, terror, murder, bloodshed - they produced Michaelangelo, Leonardo da Vinci and the Renaissance. In Switzerland they had brotherly love, five hundred years of democracy and peace, and what did that produce...? The cuckoo clock.

This memorable piece of dialogue was spoken and written by Orson Welles as Harry Lime to his friend Holly Martins (Joseph Cotten) as he leaves him by The Ferris Wheel. Of the thousands of films which I have seen, this film, which was released on 31st August 1949 by British Lion, still remains the greatest film of all-time. I was ten years of age and saw it at the ABC Coronation cinema, Manor Park in East Ham. Aptly, the film has now been remastered and theatrically released again to coincide with the centenary celebration of Orson Welles. Carol Reed constantly battled with his American producer David O Selznick to make the film he wanted to make: to shoot it on location in Vienna, insisting on Anton Karas's zither music, casting Orson Welles as Harry Lime, The reason why it holds such a coveted place in my cinematic heart is because it is a perfect example of what can be achieved when a collaboration of the greatest talents are at their peak. Alexander Korda wanted to produce a film that would be shot on location rather than in a studio. He sent author Graham Greene to Vienna to find a contemporary story. It inspired Greene to write a story based on an old idea he had had of meeting a 'dead man.' Carol Reed was chosen to direct the film after his success with The Fallen Idol. Anton Karas played the hypnotic "The Harry Lime Theme" throughout the film. He was discovered by Reed in a local beerhouse where Karas played a zither for tips. It is a close up of the zither strings that opens the film with Reed narrating a prologue over the titles and images of Vienna. www.moviesbymills.com