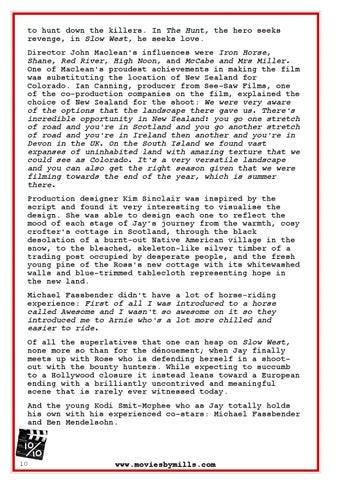 to hunt down the killers. In The Hunt, the hero seeks revenge, in Slow West, he seeks love. Director John Maclean's influences were Iron Horse, Shane, Red River, High Noon, and McCabe and Mrs Miller. One of Maclean's proudest achievements in making the film was substituting the location of New Zealand for Colorado. Ian Canning, producer from See-Saw Films, one of the co-production companies on the film, explained the choice of New Zealand for the shoot: We were very aware of the options that the landscape there gave us. There's incredible opportunity in New Zealand: you go one stretch of road and you're in Scotland and you go another stretch of road and you're in Ireland then another and you're in Devon in the UK. On the South Island we found vast expanses of uninhabited land with amazing texture that we could see as Colorado. It's a very versatile landscape and you can also get the right season given that we were filming towards the end of the year, which is summer there. Production designer Kim Sinclair was inspired by the script and found it very interesting to visualise the design. She was able to design each one to reflect the mood of each stage of Jay's journey from the warmth, cosy crofter's cottage in Scotland, through the black desolation of a burnt-out Native American village in the snow, to the bleached, skeleton-like silver timber of a trading post occupied by desperate people, and the fresh young pine of the Ross's new cottage with its whitewashed walls and blue-trimmed tablecloth representing hope in the new land. Michael Fassbender didn't have experience: First of all I was called Awesome and I wasn't so introduced me to Arnie who's a easier to ride.

Of all the superlatives that one can heap on Slow West, none more so than for the dĂŠnouement; when Jay finally meets up with Rose who is defending herself in a shootout with the bounty hunters. While expecting to succumb to a Hollywood closure it instead leans toward a European ending with a brilliantly uncontrived and meaningful scene that is rarely ever witnessed today.

And the young Kodi Smit-Mcphee who as Jay totally holds his own with his experienced co-stars: Michael Fassbender and Ben Mendelsohn.