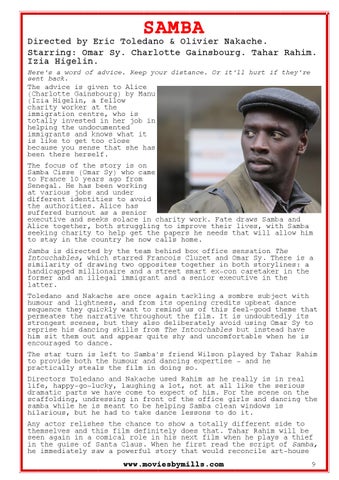 SAMBA Directed by Eric Toledano &amp; Olivier Nakache. Starring: Omar Sy. Charlotte Gainsbourg. Tahar Rahim. Izia Higelin. Here&#39;s a word of advice. Keep your distance. Or it&#39;ll hurt if they&#39;re sent back. The advice is given to Alice (Charlotte Gainsbourg) by Manu (Izia Higelin, a fellow charity worker at the immigration centre, who is totally invested in her job in helping the undocumented immigrants and knows what it is like to get too close because you sense that she has been there herself.

The focus of the story is on Samba Cisse (Omar Sy) who came to France 10 years ago from Senegal. He has been working at various jobs and under different identities to avoid the authorities. Alice has suffered burnout as a senior executive and seeks solace in charity work. Fate draws Samba and Alice together, both struggling to improve their lives, with Samba seeking charity to help get the papers he needs that will allow him to stay in the country he now calls home. Samba is directed by the team behind box office sensation The Intouchables, which starred Francois Cluzet and Omar Sy. There is a similarity of drawing two opposites together in both storylines: a handicapped millionaire and a street smart ex-con caretaker in the former and an illegal immigrant and a senior executive in the latter. Toledano and Nakache are once again tackling a sombre subject with humour and lightness, and from its opening credits upbeat dance sequence they quickly want to remind us of this feel-good theme that permeates the narrative throughout the film. It is undoubtedly its strongest scenes, but they also deliberately avoid using Omar Sy to reprise his dancing skills from The Intouchables but instead have him sit them out and appear quite shy and uncomfortable when he is encouraged to dance. The star turn is left to Samba&#39;s friend Wilson played by Tahar Rahim to provide both the humour and dancing expertise - and he practically steals the film in doing so. Directors Toledano and Nakache used Rahim as he really is in real life, happy-go-lucky, laughing a lot, not at all like the serious dramatic parts we have come to expect of him. For the scene on the scaffolding, undressing in front of the office girls and dancing the samba while he is meant to be helping Samba clean windows is hilarious, but he had to take dance lessons to do it. Any actor relishes the chance to show a totally different side to themselves and this film definitely does that. Tahar Rahim will be seen again in a comical role in his next film when he plays a thief in the guise of Santa Claus. When he first read the script of Samba, he immediately saw a powerful story that would reconcile art-house