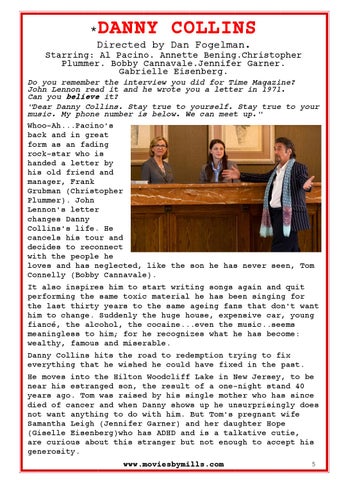 Directed by Dan Fogelman. Starring: Al Pacino. Annette Bening.Christopher Plummer. Bobby Cannavale.Jennifer Garner. Gabrielle Eisenberg. Do you remember the interview you did for Time Magazine? John Lennon read it and he wrote you a letter in 1971. Can you believe it? "Dear Danny Collins. Stay true to yourself. Stay true to your music. My phone number is below. We can meet up." Whoo-Ah...Pacino's back and in great form as an fading rock-star who is handed a letter by his old friend and manager, Frank Grubman (Christopher Plummer). John Lennon's letter changes Danny Collins's life. He cancels his tour and decides to reconnect with the people he loves and has neglected, like the son he has never seen, Tom Connelly (Bobby Cannavale). It also inspires him to start writing songs again and quit performing the same toxic material he has been singing for the last thirty years to the same ageing fans that don't want him to change. Suddenly the huge house, expensive car, young fiancĂŠ, the alcohol, the cocaine...even the music..seems meaningless to him; for he recognizes what he has become: wealthy, famous and miserable. Danny Collins hits the road to redemption trying to fix everything that he wished he could have fixed in the past. He moves into the Hilton Woodcliff Lake in New Jersey, to be near his estranged son, the result of a one-night stand 40 years ago. Tom was raised by his single mother who has since died of cancer and when Danny shows up he unsurprisingly does not want anything to do with him. But Tom's pregnant wife Samantha Leigh (Jennifer Garner) and her daughter Hope (Giselle Eisenberg)who has ADHD and is a talkative cutie, are curious about this stranger but not enough to accept his generosity. www.moviesbymills.com