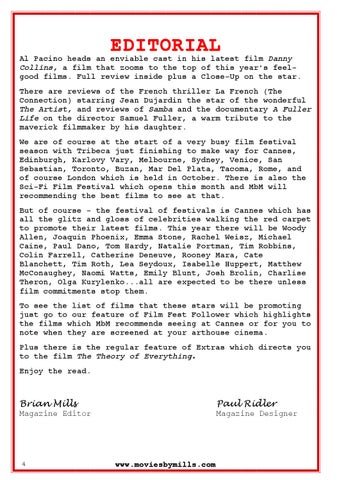 EDITORIAL Al Pacino heads an enviable cast in his latest film Danny Collins, a film that zooms to the top of this year's feelgood films. Full review inside plus a Close-Up on the star. There are reviews of the French thriller La French (The Connection) starring Jean Dujardin the star of the wonderful The Artist, and reviews of Samba and the documentary A Fuller Life on the director Samuel Fuller, a warm tribute to the maverick filmmaker by his daughter. We are of course at the start of a very busy film festival season with Tribeca just finishing to make way for Cannes, Edinburgh, Karlovy Vary, Melbourne, Sydney, Venice, San Sebastian, Toronto, Buzan, Mar Del Plata, Tacoma, Rome, and of course London which is held in October. There is also the Sci-Fi Film Festival which opens this month and MbM will recommending the best films to see at that. But of course - the festival of festivals is Cannes which has all the glitz and gloss of celebrities walking the red carpet to promote their latest films. This year there will be Woody Allen, Joaquin Phoenix, Emma Stone, Rachel Weisz, Michael Caine, Paul Dano, Tom Hardy, Natalie Portman, Tim Robbins, Colin Farrell, Catherine Deneuve, Rooney Mara, Cate Blanchett, Tim Roth, Lea Seydoux, Isabelle Huppert, Matthew McConaughey, Naomi Watts, Emily Blunt, Josh Brolin, Charlise Theron, Olga Kurylenko...all are expected to be there unless film commitments stop them. To see the list of films that these stars will be promoting just go to our feature of Film Fest Follower which highlights the films which MbM recommends seeing at Cannes or for you to note when they are screened at your arthouse cinema. Plus there is the regular feature of Extras which directs you to the film The Theory of Everything. Enjoy the read.