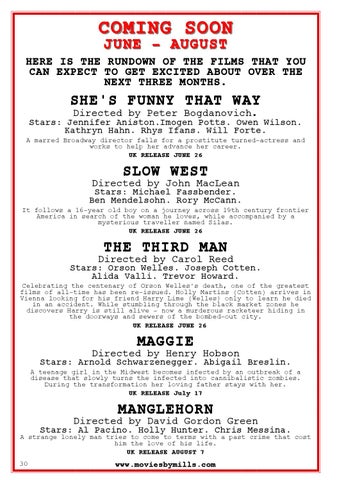 HERE IS THE RUNDOWN OF THE FILMS THAT YOU CAN EXPECT TO GET EXCITED ABOUT OVER THE NEXT THREE MONTHS.

THE THIRD MAN Directed by Carol Reed Stars: Orson Welles. Joseph Cotten. Alida Valli. Trevor Howard. Celebrating the centenary of Orson Welles's death, one of the greatest films of all-time has been re-issued. Holly Martins (Cotten) arrives in Vienna looking for his friend Harry Lime (Welles) only to learn he died in an accident. While stumbling through the black market zones he discovers Harry is still alive - now a murderous racketeer hiding in the doorways and sewers of the bombed-out city. UK RELEASE JUNE 26

MAGGIE Directed by Henry Hobson Stars: Arnold Schwarzenegger. Abigail Breslin. A teenage girl in the Midwest becomes infected by an outbreak of a disease that slowly turns the infected into cannibalistic zombies. During the transformation her loving father stays with her. UK RELEASE July 17

A strange lonely man tries to come to terms with a past crime that cost him the love of his life. UK RELEASE AUGUST 7 30