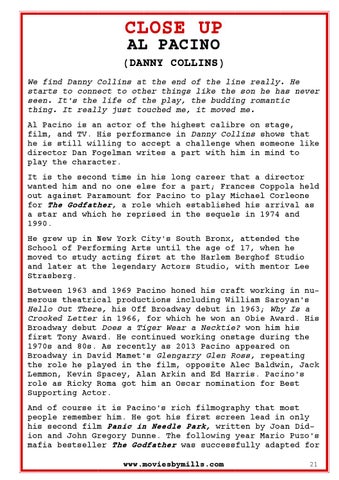 (DANNY COLLINS) We find Danny Collins at the end of the line really. He starts to connect to other things like the son he has never seen. It&#39;s the life of the play, the budding romantic thing. It really just touched me, it moved me. Al Pacino is an actor of the highest calibre on stage, film, and TV. His performance in Danny Collins shows that he is still willing to accept a challenge when someone like director Dan Fogelman writes a part with him in mind to play the character. It is the second time in his long career that a director wanted him and no one else for a part; Frances Coppola held out against Paramount for Pacino to play Michael Corleone for The Godfather, a role which established his arrival as a star and which he reprised in the sequels in 1974 and 1990. He grew up in New York City&#39;s South Bronx, attended the School of Performing Arts until the age of 17, when he moved to study acting first at the Harlem Berghof Studio and later at the legendary Actors Studio, with mentor Lee Strasberg. Between 1963 and 1969 Pacino honed his craft working in numerous theatrical productions including William Saroyan&#39;s Hello Out There, his Off Broadway debut in 1963; Why Is a Crooked Letter in 1966, for which he won an Obie Award. His Broadway debut Does a Tiger Wear a Necktie? won him his first Tony Award. He continued working onstage during the 1970s and 80s. As recently as 2013 Pacino appeared on Broadway in David Mamet&#39;s Glengarry Glen Ross, repeating the role he played in the film, opposite Alec Baldwin, Jack Lemmon, Kevin Spacey, Alan Arkin and Ed Harris. Pacino&#39;s role as Ricky Roma got him an Oscar nomination for Best Supporting Actor. And of course it is Pacino&#39;s rich filmography that most people remember him. He got his first screen lead in only his second film Panic in Needle Park, written by Joan Didion and John Gregory Dunne. The following year Mario Puzo&#39;s mafia bestseller The Godfather was successfully adapted for www.moviesbymills.com